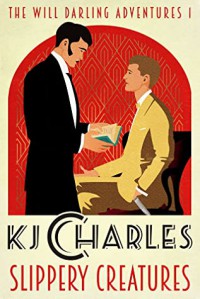 It has to be said, I don't pre-order a lot of books but the blurb for Slippery Creatures, as well as my experiences with this author's previous works, made me hit that pre-order button as soon as I hear about it...

Our hero is the eponymous Will Darling, returned from the war with a few scars and some dubious skills. There are things he's now good at, thanks to that experience, but it's decidedly unclear how he can make a living from any of them and he's heading towards penury when a long-lost uncle helps him out. A few months later, Will has inherited his uncle's bookshop and is set on learning the trade, only to be threatened by a stranger to hand over something his uncle was given or else. Will being not just competent but also as stubborn as they come, refuses to do so and has the same answer for an unpleasant representative of the War Office who comes calling soon after.

Determined to figure out for himself what secrets his uncle was involved with, so he can make up his own mind what to do with whatever it is, Will finds himself an unlikely ally in the aristocratic Kim Secretan. They also pretty quickly become intimate, with qualms of conscience on the part of Will later, when he meets and very much likes Kim's fiancee. All, of course, is not as it seems both in terms of Kim's private life and his motivations, as Will is to discover during the course of Slippery Creatures (and on into the rest of the trilogy).

If you're looking for a book that's just a number of sex scenes loosely held together by a wafer-thin plot, Slippery Creatures is not the book for you. The characters are well drawn and behave consistently with their character, while the overall plotting is well done. I guessed a couple of things before their reveal but it didn't detract from my overall enjoyment. I'm now looking forward immensely to the next book in the series, The Sugared Game (due out later this year), to see how the relationship between Kim and Will recovers from all of the revelations of this one, as we're confidently promised a HEA by the end of the trilogy.

This isn't the only book by KJ Charles has written that's set in this period, which makes the only downside about how entertaining this one is that she's surely delaying getting round to writing sequels for the others - if this book works for you, make sure you check out both Think of England and Spectred Isle.