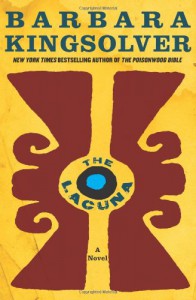 When I needed something substantial for a reading challenge, a 630-page paperback sounded like just the ticket, so here we are...

I don't read a lot of fiction that isn't genre, one way or another but I've read a bunch of this author's books and generally enjoy them - The Lacuna was no exception to this, though I can't see myself re-reading it. It's set in the 1920's to 1950's, with our protagonist spending a chunk of his time living in Mexico with his mother, who attempts to attach herself to a series of unimpressive but well-off American men. As a result, Harrison has a sporadic formal education but ends up working as a cook/secretary for the painters Diego Rivera and Frida Kahlo, then later as a secretary for their guest, Lev Trotsky.

Anyone who knows their history may recall things come to a bad end for Trotsky and Harrison is there throughout that sorry tale, before Frida finds him a job that sends him back to the United States. After the war, Harrison makes a reasonable living writing fiction about the Aztecs until the House Unamerican Activities Committee makes his life impossible. Much of the story is told in Harrison's journals, from his boyhood with an unpredictable mother, through to his difficulties with his communist-related past. In the end, it's a passage from one of his books that seals his fate, ascribed as his own political views when it's really from the mouth of one of his characters.

The Lacuna is an interesting tale, told from the inside of two bits of history I've not read much about, so I'm glad I read it. If you're interested in more of this writer's work, I'd recommend checking out The Poisonwood Bible (missionaries in the post-colonial Congo) or her short story collection Homeland and Other Stories.