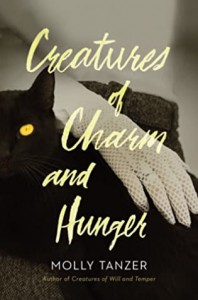 Sometimes, often in the first book of a series, it seems like there's a definite temptation for an author to stick in just a little more plot than that book can handle - if there's one thing to say about Creatures of Charm and Hunger, it's that it's one of those books.

The basic premise is that our main characters, Jane and Miriam, are teenage girls who are both studying to become diabolists - to use a form of magic that involves binding demons and then using their essence to support a pact made between demon and diabolist. There's also something going on here about plants being involved but that kind of didn't quite stick in my mind while I was reading this, so I'm not 100% clear how it works. Anyway, both are about to take their Test (hey, you know it's serious when random capital letters are involved), to see if they're good enough to be allowed to make a Pact with a demon or not. At one point, they happen to discover that if they don't pass, they might be used as materia themselves, so better pass I guess?

This is all going on with a backdrop of the later stages of World War 2, which is where the slight overload of stuff going on starts to happen. There's a raid spearheaded by Jane's aunt Edith, which goes spectacularly wrong and doesn't seem to have all that clear a reasoning behind it in the first place, and also Miriam uses forbidden magic to try and discover the fate of her parents. Meanwhile, Jane has failed her Test and is also dabbling with powers beyond her control and sets off a disastrous chain of events in the family home.

There's also quite a lot of exposition, which means the pace of Creatures of Charm and Hunger drags at times. There's a lot going on here that's interesting, especially the stuff around Jane's choice of very stereotypical witch behaviour (enchanting a broomstick, cackling etc.) but the denouement around what happens to Jane's mother falls quite flat. Jane herself seems to just shrug and walk away, which is convenient for the continuation of the series but didn't ring true. So, all in all, an interesting enough book but not one where I'll be looking that hard to read any further.

On an unrelated note, I wish the author would stop giving her books very similar titles - this is the third book with 'Creatures of [something] and [something]' and they're not really a series as such as far as I can tell.

Thanks to Netgalley and the publisher for a free copy of this book, which I received in exchange for an honest review.