The Secret War Against the Arts - Richard Knott 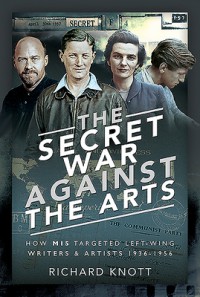 I picked up a copy of this book via Netgalley, though I don't read as much non-fiction, since it sounded interesting and I'd come across the wholesale surveillance of the left during the inter-war period in the excellent The Defence of the Realm: The Authorised History of MI5, which I highly recommend if you're interested in this subject. In fact, I don't think that I actually learned much from this book that I hadn't already come across in that one, so that didn't bode well for my overall review.

The Secret War Against the Arts is all about MI5 surveillance of left-leaning creative types, some of whom were actual British Communist Party members for at least a time, while others were just generally liberal. We have a sprinkling of poets, writers and artists, of varying degrees of fame and the book pays more attention to some than others, possibly because of the amount of material available on them. There is still, apparently, information held on various individuals in the National Archive which is still considered too sensitive to release.

There are some interesting stories here but it also seems to gloss over quite a lot - these are well-heeled individuals in general where the surveillance they were under didn't actually seem to have a major impact on their lives for the most part. That takes away the urgency of the situation and the choices around how to structure the book (it's decidedly non-linear between chapters) also made it not the easiest read. Perhaps if I hadn't read the Christopher Andrew book, this one would have made more of an impression on me, but I didn't really come away from it feeling like it was a book that desperately needed to be written.

I received a free copy of this book from the publisher via Netgalley in exchange for an honest review.