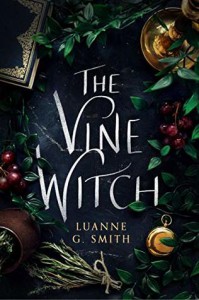 I picked up The Vine Witch when it was on offer, not knowing anything about the story bar the blurb, and was pleasantly surprised by this story from a first-time author. It's a mixture of historical fiction, being set in France around the turn of the last century, and fantasy, so it seemed like something that would work for me.

We first meet Elena, our protagonist, while she is struggling under a curse - she has literally been a toad for the past seven years but has managed to find a way to break free. She plans to return to the vineyard where she grew up and which she has served as a vine witch, working magic to make the vines grow and good wine be produced. When she reverts to human, Elena finds that all sorts of things have moved on in her absence, including her ex-boyfriend who she suspects of having cursed her. The vineyard she loves is struggling under curses of its own and has been sold to an outsider, who is sceptical of magic to say the least.

Alongside Elena's attempts to free the vineyard and discover who turned her into a toad, there's a series of cats being murdered for their blood (not graphically described, as far as I can recall, for people who worry about this sort of thing) and when the ex-boyfriend turns up dead, Elena is the main suspect.

There were a lot of things I enjoyed about The Vine Witch, although I wasn't 100% convinced by the setting - sometimes you can get a sense of how much research has gone into the background details and I just didn't get a good feel of that from this book. This wasn't helped by the odd occasions when a random French word or expression got dropped in, sometimes to conversation, as if to remind us of our location. This was a little jarring considering people would be speaking French all the time anyway, so why pick those particular things? It wasn't enough to bounce me out of the story but I still found it a little annoying.

Anyway, there's a sequel (The Glamourist) coming next summer, so if this book works for you then maybe you'll keep an eye out for it? This story isn't left with a cliffhanger, though, so it works perfectly well as a standalone book.