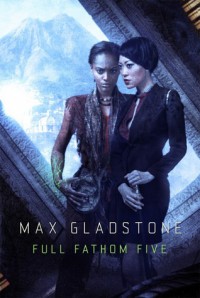 Full Fathom Five is the third book in Gladstone's Craft Sequence, following on from Three Parts Dead and Two Serpents Rise, with characters from both making an appearance in a story set in another part of that world.

Kai is a priestess on the island of Kavekana, where they make a living by crafting idols to take the place of gods in dealings with the rest of the world - as we first encounter her, she makes the decision to try and intervene to save one of those idols, only to discover that there is significantly more to it than meets the eye. As we discover later on, these idols are not as isolated from the gods who have been killed or deposed elsewhere on this world and that's a secret people are willing to kill in order to keep.

Another perspective on the same story is told by Izza, a child from elsewhere now living on the streets of Kavekana, who encounters a strange foreigner (Cat from Three Parts Dead) who can fight the stone Penitents that the island uses to enforce the law. These are a particularly horrifying creation, stone statues used to hold and re-educate petty criminals who can be heard screaming or whimpering from inside them. *shudders*

Anyway, with the assistance of Teo from Two Serpents Rise, Kai manages to ensure that the truth comes out at no minor expense to herself and those around her. I have to admit that I was struggling with this book in comparison to the previous two and it took a bit more persistence on my part to carry on with it, since it drags a bit in the middle, but then the pace picked up again and pretty much all the loose ends got tied up. The series continues with Last First Snow (though technically, that's a prequel to the entire sequence, as it deals with events years before Two Serpents Rise) and a copy of that is literally sat in the pile of books by my bed as I write this...