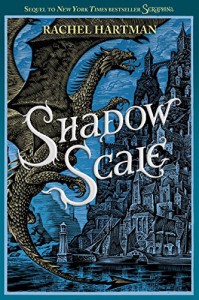 This is the sequel to Seraphina, which I read in 2014 and for some reason didn't review at the time - although for some reason, Shadow Scale has a few pages of that book in the back (who reads the second book in a series before the first one?) it will make much more sense if you've actually read them in order!

The main thing you need to know is that there are dragons, who can also look like human beings if they want, though their mannerisms tend to give them away, and there are also half-dragons like our eponymous heroine who can't change shape but have some dragon-like features. Brought up with her dragon uncle playing a large part in her life, Seraphina has always had a connection with other half-dragons but didn't realise how potentially powerful it was. Now, it seems that connection holds the key to helping one faction of dragons regain control of their country in order to prevent the countries inhabited mainly by humans being over-run.

Because this is a YA book, there is (of course!) a romantic sub-plot though at least it has the relative novelty of being a love triangle involving two women who are also friends with one another rather than two men vying for the attentions of one woman. To be perfectly honest, I find most of these pretty tedious and this was no exception, right up to the point where the triangle turns out to be suddenly a lot less conventional than was initially thought. Sadly this happens so close to the end of the book and with more implied than stated, so it was only a partial save!