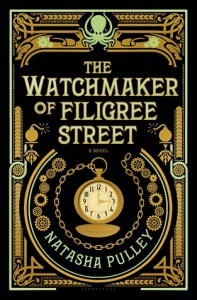 When I started writing this, I was wavering between giving The Watchmaker of Filigree Street 4 or 5 stars, but in the end it came down to the likelihood I will want read it again - I probably won't, so 4 stars it is!

There are a lot of really good things about this book and on the whole I enjoyed it very much. The setting is Victorian London but one where clockwork is a much more important technology and, if the devices described are anything to go by, also significantly advanced to the point of almost magic. We first encounter this in the shape of a watch left anonymously for Thaniel Steepleton, who works as a telegraph operator in the Home Office, a device that eventually saves his life from a bomb set by Irish separatists at nearby Scotland Yard.

Early on in the story, Thaniel has been able to track down the watchmaker responsible and discovers him to be Japanese, a man who can do all sorts of wonderful things with clockwork (including a clockwork octopus, who probably inspired many people reading this book to go 'I want one of those!'). When an intricate clockwork mechanism is discovered to have been involved with the bombing, Thaniel is persuaded to live with Mori and spy on him, a scheme to which he reluctantly agrees.

Alongside all of this, there's also a storyline involving another character, one Grace Carrow who is just finishing her time at university where she has been studying physics, in her case the physics of the ether (much beloved of steampunk writers everywhere). However, her family expect her to come back to London and marry, threatening to withhold her inheritance if she doesn't do as they want, so Grace reluctantly agrees. She and Thaniel fall in together at a Foreign Office ball and she hatches a scheme where they'll marry so she can get hold of her inheritance and she will also deal with Thaniel's money worries over his sister and nephews.

While not wanting to give too much of the overall plot away, there's also a lot going on in London at this time, not just the bombings and related seditious meetings, but also a fascination for all things Japanese and the creation of The Mikado, with Gilbert and Sullivan both appearing. As Thaniel learns Japanese and tries to balance his friendship with Mori and the role he's been asked to play as a spy, he also is able to develop as a character.

In the end, I think it's also this which helps me lean towards 4 stars, because (in my opinion) Grace doesn't make the same journey as a character, starting the book as driven and relatively unlikeable and also finishing it the same way. This is partly helped by a couple of the decisions she makes, which are very much all about her even though she couches them as being for both her and Thaniel's benefit. In the end, however, everything gets tied up in a neat bow and that's also a little unsatisfying, so yes, 4 stars it is! Given that this is a first novel, I look forward to seeing what comes next from this author...