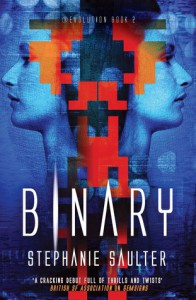 I read the first book in this series (Gemsigns) after it was recommended by multiple people at WorldCon last year and discovered just why folks were raving about it - fortunately for me, the local library has discovered Stephanie Saulter and recently bought the second book (Binary) with the third book (Regeneration) on order, so that'll be reviewed on here in due course...

As this is the middle book of the trilogy and I hadn't done a proper review of the first one, I feel there needs to be some explanation of the setting: essentially, the book is set in London some years after a cognitive disorder called the Syndrome had decimated the world's population. In response to that, various companies had developed what they call 'gemtech', essentially genetically engineering people to do the jobs nobody wants to do or is able to do - so you might have someone (described as a 'gem') who can breathe underwater or work at very high altitudes, but who is essentially the property of those companies. The world is divided between 'gems' and 'norms' and Gemsigns is about the campaign for the gems to gain full human rights, against the opposition of the companies involved, led by a charismatic gem called Aryel Morningstar.

Binary is set shortly after that campaign has succeeded, with many of the same characters playing significant parts in its story. While the world is trying to work out just how gems and norms are going to relate to one another, a whistleblower informs the police that valuable raw material has been stolen from one of the gemtech companies. At the same time, the company concerned is trying to reinvent itself and tap into unexplored areas of research, namely the link between computers and people - for that research to succeed, they need the cooperation of one of their former pieces of property, which also gives the gems an opportunity to find out if the company has really changed the way it claims. Closer to home, one of Aryel's family is becoming more and more unwell from a disorder that seems to be related to his genetic code, so the opportunity to mine the company's archives for anything that might help is almost too good to be true.

I think one of the strengths of these books is how believable the characters are, especially in their interactions with one another - none of them are perfect but they are all very human, regardless of their background. In Binary, we discover something about the backstory for both Aryel herself and her main adversary, the CEO of Bel'Natur - meanwhile, new relationships are formed and old ones strengthened by adversity. Seriously, it's all good - read these books, read Regeneration when you get the chance and anything else Stephanie Saulter might write in the future.